Generation Six with Alpha Sapphire/Omega Ruby and X/Y is a fantastic place to kick off a Living Dex project, as it's the last generation (as of writing this) that has a full National Dex. Join me on my adventure first through the nostalgic Hoenn remake then followed by the French-inspired Kalos.

The Bottom of a Cardboard Box

An afternoon of tidying and cleaning unearthed my Nintendo 3DS from the depths of a ragged cardboard box. It was an exciting find because it meant my DS Lite and Pokémon games were near. Rummaging to find Pokémon Platinum rewarded me with not just my Platinum teams but squads from Sapphire and FireRed too as I had made a previous effort to migrate Pokémon up. It was a fun and nostalgic afternoon.

Inspired by my efforts, my better half also rummaged to find her 3DS and slid in the cartridge for Pokémon X. Playing on and off for a couple of days, she decided to do the various Regional Dex completions for Kalos - a unique system where each Pokémon fits into one of Central Kalos, Coastal Kalos, or Mountain Kalos. Being privy to the Pokémon fun, I started to get itchy and dabbled into what would be needed for a full National Dex. From a practical stand point, it's ideal to start from Generation Six due to the two sets of games: Alpha Sapphire/Omega Ruby and X/Y. I already had Y so I needed either Alpha Sapphire or Omega Ruby. Since I had deep nostalgic feelings for Sapphire, I headed to the Nintendo eStore to eye up the Alpha remake.

After umm-ing and ah-ing for the afternoon, I said: "... I'm gonna buy it." It was then 17:51 on Wednesday 7 April 2021 I bought a digital copy of Pokémon Alpha Sapphire. (Side note: Pokémon tax. The price was still original retail, nearly seven years later!)

So, Why Generation Six?

If you're going for the National Dex, Generation Six is a solid jumping point because:

I chose Alpha Sapphire first due to the above reasons and simple nostalgia.

The story playthrough was the same as anyone else's. But it was fun to revisit old places, try to remember routes and even teams of some trainers - a surprising amount of knowledge was rattling around. Mauville City changing into a single building mega-apartment-city threw me off (see images below) and the two most exciting fun new things for me were the Soaring in the Sky mechanic, and simply Hoenn feeling more alive.

In respect to my team, I kept on my old tried and true Tropius and Sharpedo combo for HMs and tried to spice up the other four slots with Pokémon I don't normally use. On beating the Pokémon League, the squad looked like:

Unknown to me, the post game is now kicked off by the Delta Episode, and it blew my socks off that it ended with a Deoxys! I wasn't ready at all and it took a reset to catch it.

It's from here that the real catching started. By scouring the grasses, rivers, and caves I could rack up around 550 Pokémon. Early-ish in this long hatching and catching spree I hatched my star player: Smeargle.

Hatched on 10 April 2021, this Adamant nature Smeargle is designed for this Living Dex run with:

Then giving it the hold item Metronome for the extra attack boost allowed me to grab every regular Pokémon I could find with ease. The Pokémon that were easy to catch, but took ages, were the glut of legendaries available by Soaring in the Sky. Around 18 of them with each having various conditions such as time of day, day of week, party Pokémon, etc. Serebii has a good list (which also includes the regular legendaries of the base game).

Between spending hours waiting for appropriate conditions for legendaries to appear (including the weird conditions for Regigigas), I also spent time ticking off post game activities to lighten the boredom from this great website.

Monday morning on the 19th of April, I ran into my first shiny of the project, a Gloom:

When the seaweed and tall towers stopped interesting me with their available Pokémon it was time to turn social. I was surprised at how active the GTS was considering these games are nearly seven years old as of writing this. A lot of time was spent in the GTS trading Kadabras because this would give the other person the rare-ish trade-only evolution: Alakazam. This was effective in nabbing more wily Pokémon; such as the fossils and Mirage Spot Pokémon.

It was also great fun participating in Wonder Trades and more than once I got my own Pokémon back! Though the sheer amount of trash Pokémon, hacked Pokémon, hacked shiny Pokémon, self advertising Pokémon, and perfect IV/egg move Pokémon were wild. A lawless land but, if you set your expectations correctly, a heap of fun.

It was roughly around this time that I got my first diploma of the project:

From here it would be easier to nab Kalos Pokémon myself. As such: Allons-y!

My better half originally got me Y when it was new. Except I had barely played it as by that point my life was moving into (boring) adult work life and (dull) responsibilities.

Playing it properly I couldn't believe the great quality of life features:

Sure I had these in Alpha Sapphire (and even more piled on for that) but it was great seeing the first instance of these first hand.

The story was alright, I don't remember too much of it. But I do remember the "it's been 3000 years" meme guy. It's always great to visit a meme in the wild.

Normally I tend to play a new Pokémon game only using Pokémon from that generation, but in this case I rolled the game with:

My Trainer Card below shows a short playtime as I didn't really need too much out of this game as the majority of the Pokédex work was in Alpha Sapphire. It's fun to point out that my start date was a long time ago, just when those responsibilities were piling up.

With the story done, it was back to the Pokédex. There weren't many regular Pokémon left but I did run across another shiny - a Skorupi on the 9th of May 2021.

It wasn't long before only the hard to get 'mons were left. I had traded away some legendaries to my better half (knowing I can get them in future games) but others I had yet to obtain at all. An example of the most glaring Pokédex hole was Groudon - the box Pokemon for Ruby/Omega Ruby.

With all the regular and some legendary Pokémon caught, I began planning what needed to come from Omega Ruby:

Sure, I could've waited until a later generation to pick up these but I also wanted to start claiming the diplomas for each generation - meaning I had to grab Omega Ruby. I could've used the GTS but I wanted to make sure my Pokémon were legit. This left me then with two options: buy a digital copy or a physical copy.

Ultimately I chose a physical copy because I liked the idea of physically owning the game. One online auction and a Friday the 23rd of April delivery later:

This package also included Ultra Sun and Ultra Moon as any Pokémon I trade away to my better half could be caught again via the Ultra Sun/Ultra Moon post-game wormhole minigame (spoilers: I spent probably 30 hours+ on it).

Starting up Omega Ruby for the first time unveiled a wonderful surprise: An existing save file. Meet Kieran (whom I've bankrupted):

Kieran was great because he:

Thanks to this save file I didn't have to play through Hoenn again to grab the Pokémon I needed. You'll find that throughout this project I don't mind relying on other players for their Pokémon. I enjoy having French, German, or Japanese Pokémon in my Living Dex. There even are people out there who've done their Living Dex with no two Pokémon from the same trainer! However, I do draw the line with online trades of legendary and mythical Pokémon as it's impossible to determine whether they're legit or not due to technicalities around internal Pokémon data. Sure, maybe my Japanese Charmander is hacked in but they're easy to get anyway and I think it's worth the fun! I go more into the ethics around hacked in Pokémon in Part 3.

I StreetPass'd a copy of the fabled Eon Ticket to my Alpha Sapphire game too. The Eon Ticket was a 2014-2015 event only item, but unique as you could share a copy to others meaning there's still a chance to grab it, even in 2021, and it allowed you to get the other Latias/Latios.

The Last of Generation Six

With the combined efforts of the four Generation Six games, I was pretty much done. What was missing were 15 mythical Pokémon:

These are a problem for later and continued to be a sizable thorn in my side for the entire project. But as mythical Pokémon don't count toward diplomas, I could go back and trade the Omega Ruby Pokémon to my Y and Alpha Sapphire games to grab the diplomas:

Then my special diploma. This one is awarded to Pokémon that come from the original Hoenn games. I decided to pick my original starter Sceptile to represent:

After all that work, my Alpha Sapphire Trainer Card:

I had actually purchased a Pokémon Bank subscription after I had started Pokémon Y so I could quickly move Pokémon between Y and Alpha Sapphire. Though with a generational gap between six and seven coming up, it's prudent to bring it up beforehand as I'd be using this to move up my entire Living Dex and key Pokémon (looking at you Smeargle) into Ultra Sun/Ultra Moon.

I hope you enjoyed the largest part of the saga. We glossed over most of the trudge, but it equated to:

The lion's share of the work has now been done. Which is around 19 Pokémon a day.

Join in on the next post where I take a little break to bask in some older generation nostalgia by bringing up Pokémon from Sapphire, FireRed and Platinum into Generation Six. 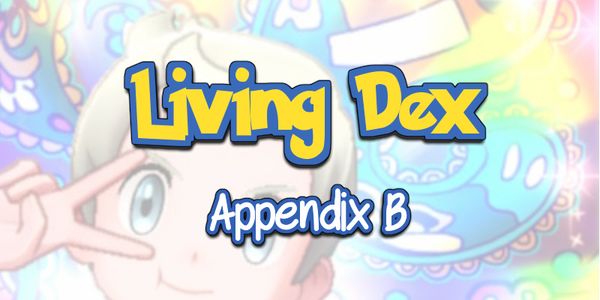 Appendix B is a list of the various Pokemon League teams, trainer cards and diplomas earned along the way in the Living Dex Project. 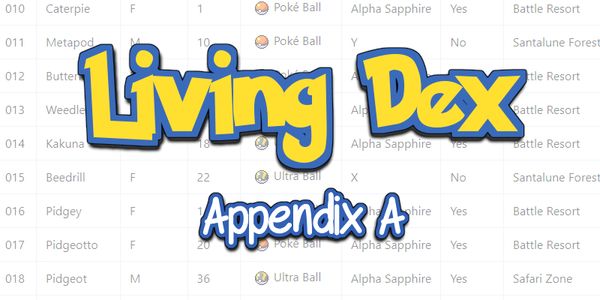 Appendix A is a tabular reference of all my Pokémon from the Living Dex project.

The final part of the original Living Dex project. Here I'll reflect on both the good and bad of the project such as duration, cost, loves, and frustrations.