In this episode, we'll look at the bits and bobs that didn't properly fit into the previous posts such as Pokémon GO, Pokémon Let's Go, various forms and any other minutia long the way.

A great way to get some mythicals but man, that G.

Pokémon from Generation Six onward have an Origin Mark which is a little symbol denoting the origin game. Pokémon from Pokémon GO get a "G" but also this "G" shows up against the Pokémon and the Pokémon's box in Pokémon Home - which I find is an ugly mark. Let me explain with pictures.

Looking at the first image, Baltoy in the box called "HOME 91" and it's little picture has the "G" against it. Then in the second image when we zoom out and look at the collection of boxes the "G" still shows as there is at least one Pokémon in the box from Pokemon GO. No other origin marks are shown this way.

I want to have a tidy and consistent look across my whole collection without having a "G" appear over a Pokémon or box. Also the "G" looks nothing like any of the other origin marks - it's just plain ugly. This mark has stopped me from using Pokémon GO for any of the project - except for two which only come from Pokémon GO: Meltan and Melmetal.

Let me explain first how to get Meltan to spawn in Pokémon GO:

For Melmetal you need to evolve Meltan. To evolve a Pokémon in GO you need that specific Pokemon's candy. Originally main ways to get candy were:

But since launch this has expanded, and you can read about the numerous other ways to get candy here.

For Meltan to evolve, it needs 400 candy. Let's look at the ideal situation. Let's say it's 3 candy per Meltan caught and 1 for the transfer. I then need 100 Meltan. 60 Meltan per hour meaning I need to open the box twice. As the box takes 3 days to open another time, I just need to open the box, catch, wait 3 days, catch. Doesn't sound too bad.

While the conditions have favourably changed since Meltans official launch, such as more Mystery Box time, this took a longer than planned and here's why:

All in all it took me about a week and a half to get enough candy for a Melmetal:

Were I playing when Meltan launched in late 2018, I could've taken advantage of the special research events to get more candy too.

On another note, after moving Melmetal from GO to Let's Go Pikachu, I realised it's kinda... Big:

Moving Pokémon GO Pokémon through Pokémon Let's Go Pikachu/Eevee prevents the big "G" from staining Pokémon Home. Though the Pokémon will still have the "G" displayed when looking at their stats. We'll see what that means using Meltan imported via Let's Go Pikachu as example:

Talking about Let's Go Pikachu, it's a Gen 7 game but was skipped over in the Gen 7 post. Let's Go and see what my playthrough there was about.

The Nintendo Switch in my household is the special edition Let's Go Pikachu Switch from launch. A cute edition which comes with the Powerball controller containing a Mew. (This Mew though isn't mine, it belongs to my better half).

While I didn't need any Pokémon from it, I still wanted to do a run as:

It wasn't the game for me. Perhaps it's because it's stored on the Switch it came with, but man it was slow. Slow to load, slow to battle, it just felt sluggish. Future edit: Hello reader, a while after this project I bought a fast microSD card for my Switch and moved the game on there. The game was snappy and responsive as expected. Either the on board Switch storage is really slow, or my Switch has a dud.

The nostalgia trip was fun and the graphics are clean but man, it was slow. On the other hand, I did enjoy:

All in all, I'm glad I went through it, but I wouldn't do it again anytime soon.

Let's move up a generation, from Kanto to Johto. I bought on Virtual Console Crystal on a Friday (16/07/2021) and finished it the next day. Generation 2 remains my favourite nostalgic generation. The incredible innovations built upon what existed and have persisted through to modern Pokémon (unlike other features...), making this a joyful romp with the added bonus of the Crystal content I missed out on as a kid.

Crystal wasn't just for fun, it was for the mythical Pokémon Celebi. The Virtual Console version gave the previously event only GS Ball to players who have beaten the Pokémon League, allowing me to pay $17NZD, and a playthrough, for a mythical.

I also love the little Game Boy Origin Mark that comes with the Virtual Console titles.

Oh, I also brought in everyone's first shiny: the red Gyarados from the Lake of Rage.

The programming term "first class citizen" can apply for the approach I took with regional Pokémon forms. I had the same dedication to grabbing the regional forms as I did regular forms. This is why, in my head, I felt I had finished the Living Dex project (again, minus 16 mythicals) once I had my Galarian Ponyta and Rapidash, not the Regidrago I had captured minutes prior.

I've said it before but I initially didn't enjoy forms. Due to where I was in life, Pokémon was only in my periphery and I saw it as another gimmick - perhaps even as another one that will be forgotten by the next game. Though, over time and during this project, I've come to really like regional forms as they flesh out the Pokémon world building through ecological means. Whether it's through new typing, new evolutions, or just the new looks I feel they bring a fun depth to lore and battles. I also find them easier to remember, perhaps because I already have an anchor based on the original form.

Forms have existed long before Generation 7. Skim through the Serebii page and you'll see there are a lot. We have all sorts of ways forms can occur some examples include:

But there are many more. The ones I'm most interested in are those that can be stored in Pokémon Home. For instance, Wishiwashi changes form only in battle and as such only its original form can exist outside of battle, including in Pokémon Home. I felt getting all these tangible forms is too much, so I decided to cherry pick which I want. Perhaps over time I'll think of adding more, but for now, I've got the following non-regional forms.

An early (Generation 2) entry in the forms list. Originally found in the Ruins of Alph, Unown represents the 26 Latin alphabet (or in other words, the English alphabet). There's minorly interesting lore around them and they're pretty weak, so really they're only here for the interesting forms - which in generation 3 picked up two new forms for ! and ?. I actually used my Platinum game to grab them, since I already had most of them hanging around in a box.

While I said I wasn't interested in forms you couldn't keep in Pokemon Home, I feel Gigantamax is close enough. Only a few Pokémon can Gigantamax and they get a special little X symbol against them for it. I'm unsure whether they'll be able to use this in later games, but for now I'm happy to keep them in the Living Dex project.

Side note: Melmetal has a Gigantamax form too but thankfully I grabbed this via a Pokémon Home Mystery Gift rather than again through Pokémon GO.

With this detour taken care of, I'll see you in the following post for the finale of the entire project. It's a long one but I hope you'll enjoy it.

Oh and via the Pokémon Home Wonder Box function (i.e. random trade), I got a shiny Magikarp, originally from Pokémon GO. Neat. 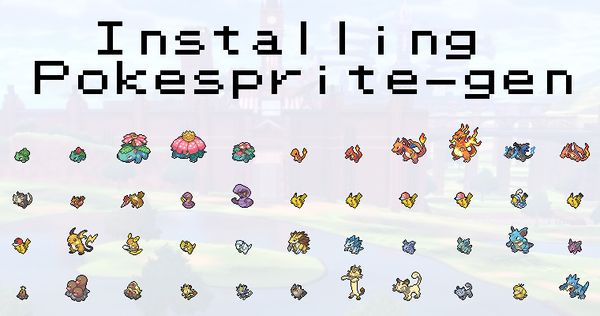