First up, let's look at a collage of all the posts (including this one!):

Six days into 2022 and I had already set my goals for the year. But just as the week was ending, I became compelled to create a new goal: post each week. Luckily, the week hadn't ended yet and my first post for the year appeared on the last day of the first seven days of 2022 - a Friday. It was a hurried and simple post but one that would prove useful for the rest of the year: My Checklist for New Posts.

Sometimes I'd have a month and a half of backlog which was great and super easy. Backlogs were super easy to build up during or after a big project where I could spin heaps of posts from a single thing. I wrote about this here: Where I Get My Blog Post Inspiration From. However... Other weeks I was scrambling Thursday night to write something up.

And I wouldn't do it again. A schedule however I really enjoyed keeping, but I don't think I can consistently churn out anything of quality week after week - because I like to do other things in my free time as well. Some nights I'd end up staying awake thinking of the next post or what my next coding assignment is for a post.

Writing is a great excuse to learn and I wrote about that in:

Which lead me to do some bigger projects across the year that were super fun:

Most of these main projects and a few others can be found in my Featured Posts area up in the nav bar at the top.

And each learning post gave me a little more luck:

I was able to widen my experience just a smidge each time. I wrote Your Personal Projects Can Be as Simple as You Want and said:

And each one of those taught me a lot and I've done many more projects. Coincidentally some even taught me skills I'd use at my job the very next month. It almost felt like I was cheating, reading the answers before I needed them, but that's just called study and it was paying off.

It wouldn't be unheard of have "how did you even know that..?" thrown at me from the work I had put into a project for a silly little post. Having that weekly consistency for 2022 was wild and I grew a lot from it.

Ardalis also writes about this:

I don't call myself a good writer, but getting better is practice, practice, practice. And a year of posts certainly helped me understand the beginning of where I can improve my writing. I even bought the book, The Writer's Diet to help me out!

You always hear it's about consistency and 2022 realy drove it home for me.

My top three posts of the year 🥁

I absolutely adored this project. I love optimisation and deeply enjoy AOT in .NET. And it was great to be able to output a silly little tangible executable to show off.

This was my first time contributing to an open source project, and it was a good experience.

Why Did I Write a Gameboy Color Image Decolouriser?

I think I really like this post because it mixed Pokémon, Gameboy, and something to show off.

Something's gotta be a little less loved and for me, it's all the PDF manipulation posts. They were filler for weeks I didn't have anything.

31K pageviews!* I'm not sure what happened in the last third of the year, but views really took off. It was neat to see the numbers go up for my silly little site📈

*For visits that weren't anti-tracked/ad blocked.

This one's for Google results. Most of my traffic is for C# code posts which would come in via "how do I merge PDFs C#", so it totally makes sense that my analytics graph above matches the Google search result hits.

Crazy that my site result was served to 631K people! 😮

At the beginning of the year I wanted to see how much revenue ads on my site could generate. I had a goal of NZD$1 a week and somehow achieved it because the site brought in just over NZD$60 (~USD$38).

I've deliberately left off the axis values since I'm being cautious around the terms of service but you can still see these spikes that happened throughout the year when visitors (accidently?) clicked on ads.

I had wanted to go hard like this for the last seven years. Separating the art from the artist, in 2004 they had a line that always had inspired me:

You can’t fathom my love, dude
Lock yourself in a room
Doing five beats a day for three summers

And I finally did it 💪

Then on that note, I also wanted to get 80% green squares for my 2022 (personal) GitHub commits. Ended up only missing five days, so easily over 80%! Though, similar to the post burnout, coding every day sometimes ended up with me making a simple readme change to get that commit.

I also ended up with another 50 or so repos on GitHub throughout the year.

Just like Troy (who also uses Ghost) I have a lot of spare drafts. I've ended up writing down draft posts with just a title and a sentence of notes for what I think would be a cool idea or something I want to chew into and learn later.

Posting for projects, and projects for posting created luck and situational magic which paid off in weeks, when I thought it would be years - an incredibly fast feedback loop.

But I won't be going so hard in 2023. It was one of those "I can try it, see what it's like, and if I don't like it, I don't need to do it ever again". Though I would like to continue to write on some sort of schedule. Perhaps every 3 weeks with one offs between. We'll see. 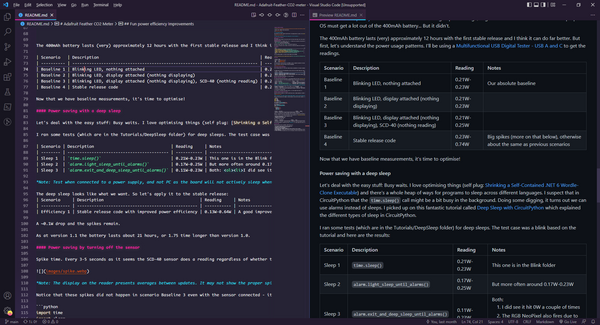 Check out what change I brought in to my personal software development environment in 2022.